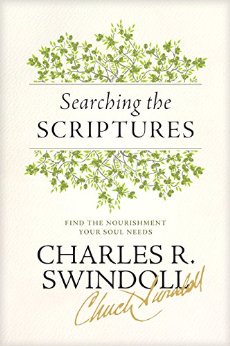 (due for publication by Tyndale September 13)

In his introduction, Swindoll says that this book is an attempt to pass on what he learned from his beloved mentor, Howard Hendricks, and built upon in his 50+ years of ministry. And indeed, there are parts of the book that are very reminiscent of Hendricks’ work, Living by the Book (1991, Moody Press). Swindoll wrote the foreword for that book, which I’ve loaned out more copies of than I’ve had returned. But even if you have that book, Searching the Scriptures is a really valuable work.

He starts with two powerful chapters that address why we should bother studying the Bible–something many people have never really had explained. If you read these two chapters and do the exercises at the end of each, you will likely come away with a new hunger for Bible study.

The next four chapters describe–and give great exercises of–his four key steps of Bible study. I won’t throw in a spoiler here…I will say that they won’t necessarily be surprising, but you’ve likely never had them explained and illustrated so clearly. The advance review copy Tyndale gave me didn’t have some graphics that are supposed to be in the final version, but I still found it easy to follow.

Swindoll puts it succinctly: “Those who don’t learn to prepare their own meals from the Scriptures simply don’t know what God’s Word has to say. It simply isn’t possible to get the spiritual food our souls need in an hour on a Sunday morning.”

There are a few anachronisms, such as his insistence on the need for a concordance. Surely we can forgive a man who has been in ministry for 50 years a few quirks related to being a bibliophile rather than an online scholar with the ability to do a word search with a duplex of taps.

This is not a quick read that you breeze through. I received my review copy from Tyndale a few weeks ago, and am just now finishing this review. If you don’t take the time to go through the exercises at the end of each chapter, you will finish this book informed but not transformed. But faithfully following Swindoll’s wise techniques will prevent one from falling into common traps such as “proof-texting;” pulling one verse or part of a verse out of context and building a false theology around it.

This book will almost certainly give you a new hunger for, and a new ability to gain nourishment from, studying God’s Word. In fact, I would argue that it should be part of every single New Christian class around the world. Even the library of every Christian around the world.

This site uses Akismet to reduce spam. Learn how your comment data is processed.